Skyscanner is not a travel agent but rather a global search engine that allows for the easy and convenient comparison of different flights. The service is free to use and makes it very easy for you to quickly look at different flights and find the best.

Skyscanner is not a travel agent but rather a global search engine that allows for the easy and convenient comparison of different flights. The service is free to use and makes it very easy for you to quickly look at different flights and find the best deal and most convenient times for your specific requirements.

Skyscanner doesn’t only sell flights directly but instead lets you browse the deals from other airlines. This way, you can make an informed decision before choosing which one to use.

Additionally, Skyscanner can also be used to compare prices on hotels, car hire and more. Once you have chosen the provider you want to go with, you’ll then be taken to the agency so that you can complete the booking process.

Skyscanner uses smart search engine technology to provide its results quickly while taking into account helpful search criteria. It also offers useful tips and news on its main page for travellers. This is much more powerful when it comes to comparing flight information when compared with similar capabilities of other travel companies.

In Skyscanner’s own words:

“Skyscanner’s flexible search options mean you can browse prices across a whole month, or even a year, allowing you to get the best deals. When you find the perfect deal through Skyscanner, you are redirected to book direct with the airline or travel agent, so you get the lowest price, with no extra fees added.”

Though the company is global, the head office is based in Scotland, with offices in Edinburgh, Glasgow, Singapore, Beijing, Miami and Barcelona. 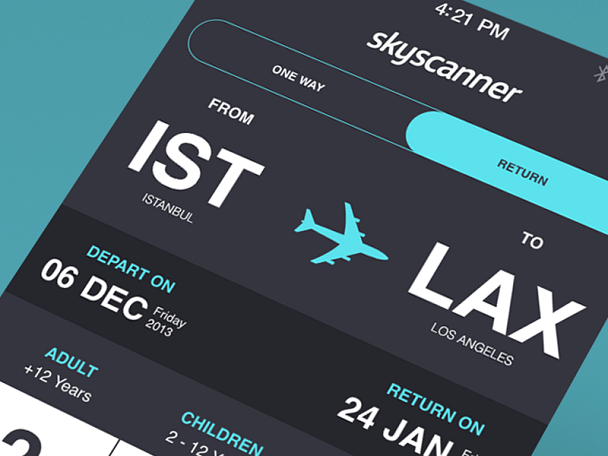 The company was formed in 2001 by three programmers: Bonamy Grimes, Barry Smith and Gareth Williams. The original motivation for forming the company was that one had been frustrated while trying to get cheap flights to ski resorts.

Thus, they developed Skyscanner version 1 which was released in 2002. In 2003 the company hired its first employee to aid site development and by 2004 the head office in Edinburgh was opened. By 2013 the company had grown to accommodate over 180 staff members.

To begin with the, the site focused only on budget airlines in Europe. However, it now includes most European carriers, including BA, KLM, Virgin Atlantic Airways and others. It has also expanded its reach, now covering the US, Canada, Asia and much of the rest of the world. It has over 35 million visitors a month and a turn over of £93 million a year.

Part of Skyscanner’s popularity comes from its ease of use and its attractive design. When you visit the website, this comes across with an uncluttered and attractive appearance. The homepage consists of the search engine itself, allowing you to enter your details for flights and when you hit ‘search’ you’ll be presented with a list of everything that meets your criteria. From here, you can then select the best offer and you’ll be taken to the site of the airline to book. The site is multilingual and available in over 30 languages.

In 2011,Skyscanner collaborated with the mobile development company Kotikan (based in Edinburgh) to release a mobile application. The app managed to receive an incredible 100,000 downloads in just six days on iPhone alone. By March 2013,the app had seen over 20 million downloads. Like the main website, the Skyscanner app receives praise for its smooth animations, easy interface and slick all-round design. It also has apps for Android and Windows, with the Desktop Windows app being particularly attractive and slick to use.

An additional feature of Skyscanner is ‘Sky tools’ – a tool that lets webmasters and users download Skyscanner flight information to embed on their own website, desktop of social media pages. APIs include a Flight Map with interactive airports, WhoFlies with airlines for any given route and FlightSearch which provides live prices. A use of this might be for a hotel based in Mauritius for instance to provide useful travel information right on its own page for holiday makers coming from the UK or Germany.

Skyscanner owns the hotel comparison firm Fogg, which it uses to extend it service to cover hotels as well. In addition to this, the company also purchased the mobile app developer ‘Distinction’ and the door-to-door travel site Zoombu. These acquisitions suggest the company has further plans for expansion.

Using Skyscanner allows users to quickly compare flight information to find the best prices for a specific trip they are hoping to make. This is of course highly advantageous,but it does have some caveats to consider.

While Skyscanner is one of the most powerful and well-received sites of its nature–and generally superior to alternatives like Kayak – it is still not completely comprehensive. Some searches may not show up on Skyscanner and this can sometimes lead to the wrong purchase whereas a professional could have provided more guidance.

Another thing to keep in mind is that Skyscanner does not support package holidays and other deals. If you are looking for a travel holiday with your family and you want to include your hotel and your airport shuttle, you might be better looking at a traditional travel agent like Thomas Cook or Virgin.

Note as well that flight prices and times are subject to change. While one option might be cheapest when you look, waiting a few days could have resulted in an even cheaper deal. This unfortunately is something that can’t easily be avoided.

Skyscanner works best then for a particular type of traveller – usually the young traveller flying alone or with a partner and who is looking for cheap and convenient travel at short notice. Indeed, surveys indicate that Skyscanner is preferred by users in the 16-34 age bracket. Among this group it appears quite popular with 64% saying they trust the platform and use it often.

Overall, Skyscanner is a very useful tool and especially when used in conjunction with other services and when used in the correct way. Like all services though, it does have some limitations.