The ways to exercise and chase fitness are vast, and there are plenty that probably wouldn’t work for you in the long-run. That detail doesn’t necessarily mean that you can’t commit to one routine or that you’re lazy.

The ways to exercise and chase fitness are vast, and there are plenty that probably wouldn’t work for you in the long-run. That detail doesn’t necessarily mean that you can’t commit to one routine or that you’re lazy, but it’s a commonality among people in tending to things they enjoy and can comfortably handle. Essentially, if you can’t find a workout strategy that sufficiently fits your needs, schedule, and interests, the odds officially lean in favor of you dumping that regimen at a fairly early stage in the process. This is why it’s important to find the exercise schedule and process that’s right for you. If you’ll only run for fitness, be sure to lace up those running shoes! If you’ll only dance, try Zumba! If you’ll only hike, check out your local trails!

For me, the most successful exercise method I’ve found for fitness is yoga. I discovered this after a number of missteps and failures. I tried doing a series of sit-ups, push-ups, lunges… And it didn’t pan out for the long-haul. I had an elliptical, and while that strategy could’ve stood a better chance, the structure of the machine itself made using it a ridiculous process that had me quitting and using it as a coat rack.

But yoga? That one really stuck for a while, though I admittedly should dive back into my earlier attachment to the practice. I prefer the notion that rather than feeling exhausted after a workout, I actually feel relaxed and like I’ve just had an awesome, first-thing-in-the-morning stretch. It’s calming in a way, and it inspires confidence in me that only comes through knowing that I did something to take care of myself.

I found my right way to exercise, but even within that way, I’ve discovered that I have my own bizarre take on *how* to practice yoga. I don’t follow a YouTube video or count breaths, and I don’t use it as a strictly meditative process. Those things, in the end, aren’t me, and your fitness approach needs to be *you* if you want a higher likelihood of continuing with the approach. Through time though, I’ve discovered my odd take on yoga, and I’ll share that with you.

First, candlelight is a very real factor. Ideally, yoga should happen—for me—after the sun goes does, and I can light a scented candle before I go through the yoga poses that I’ve decided to use. There’s something about that lighting tactic that’s calming and serene, and I find that it perfectly matches the ideal feel of yoga for me. As it stands, I’ve bought more scented candles in the last three years or so than I bought in the 20+ years beforehand!

There’s also the option of letting the TV run while I go through my poses, and both Netflix and Food Network have been companions for this detail. It’s a good option because it gives me something as background entertainment while I exercise, but we’re talking ideal here! And if I want ideal, I turn to music!

Right now, I have on my laptop a playlist of slow songs that range through different artists, times, and genres for yoga purposes. For instance, these songs have shown up on my yoga playlists:

Leave the Pieces – The Wreckers

See? Variety! The important detail is that, somehow, these songs have the right melody and feel to reflect the relaxed feeling I’m going for with exercising. Considering these poses can become hard to maintain, particularly when the very real burn starts setting in for holding one stance extensively, any detail that can help me stay in that relaxed mind frame could be helpful. A slow song that has a mellow atmosphere can assist in achieving that goal since it gives me something fluid to focus on in place of the pain that starts bubbling up while I’m still in the extended side angle pose. 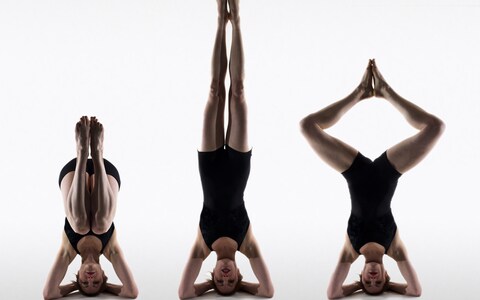 But playing music doesn’t just help with the atmosphere and keeping my mind off of the more strained moments of practicing yoga. It’s a practical strategy to time my poses. As I said, I don’t standardly count breaths when I’m doing yoga, so it helps to have a method of knowing when to transition to the next pose beyond just “I’m tired of this one! Time to change!” With music playing, I can make mental stopping points that I intend to keep.

For instance, if “Tender Feeling” by Elvis Presley is playing, I can give Warrior III an ending moment of “as soon as the chorus is over.” That way, I can plan out a moment to transition to a different stance that is distant enough to make whatever stance I’m currently in sufficiently challenging, one that allows me to move on when a specific moment comes. Even if the burn becomes pressing, I can keep telling myself, “Just a few more seconds! I’m almost there!” Songs are guidelines then, and encouragement for the rougher moments of the exercise.

In addition to this detail, playing music is helpful on a very different level. I tend to sing along to the music, and research suggests that singing comes with its own benefits to your health—like “lower[ing] stress” as well as “reliev[ing] anxiety and contribut[ing] to quality of life” (Horn, 2013, para. 4). Seeing as how stress can wreak havoc on your body, this is a benefit that blends beautifully with the notion of practicing yoga to benefit physical health.

It’s also a valid replacement in regard to my decision to not treat yoga as a strictly meditative practice. I might not be focusing on counting, but I *am* focused on lyrics and belting them out, which can achieve a level of mental calm that’s akin to a breath of fresh air. Both the singing and the yoga are capable of improving health while soothing tension, so as odd as the combination might sound, they honestly complement each other very well in this regard.

I also don’t have a list of poses that were provided through some routine or fitness video. I instead chose a series of stances through my own research (which may or may not have included a good amount of Pinterest browsing), and the ending regimen was created through a bit of trial and error. If I didn’t like a pose for a good reason, I stopped doing it. If I particularly liked one, there’s a very real chance that I’d hold it a bit longer. Is that standard practice? Probably not! But as I mentioned earlier, your routine needs to be what’s right for you. So long as I’m pushing myself appropriately and being aware of my limits, it’s better that I tend to my fitness in this way than to overlook fitness altogether.

And that’s the underlying theme within this post. You might never find someone else who does yoga exactly the way I do, but it works *for me.* You stand a better shot of maintaining your exercise regimen by finding something that works *for you.* If that means doing 100 push-ups every morning, go with it! If you need a bit more variety with your workout, switch your exercise style throughout your week! If you’d rather be outdoors, take your workout outside!

And even if someone thinks you’re odd for your approach, know that you’re doing something that’s bettering you, and you’re keeping yourself in mind in the process. There’s no shame to be had there—even if you’re the oddball doing yoga by candlelight while singing 80’s power ballads!